Phytopathogenic fungi of the genus Colletotrichum cause major damage to crops in tropical, subtropical and temperate regions world wide. Members of this genus cause economically significant diseases of cereals and grasses, legumes, vegetables and perennials crops including fruit trees. Colletotrichum species cause typical disease symptoms known as anthracnose characterized by sunken necrotic tissue where masses of orange conidia are produced.

Anthracnose leaf blight (ALB) of maize, caused by the filamentous fungus Colletotrichum graminicola, begins when spores land on the leaf surface, adhere to the cuticle and germinate, forming specialized infection structures called appressoria (Fig. 1). Our knowledge of the processes of spore germination, germ tube formation and appressorium development has grown in recent years and are essentially the same for all Colletotrichum. By comparison to these pre-infection events, our knowledge of the events that occur after infection of the host is limited. 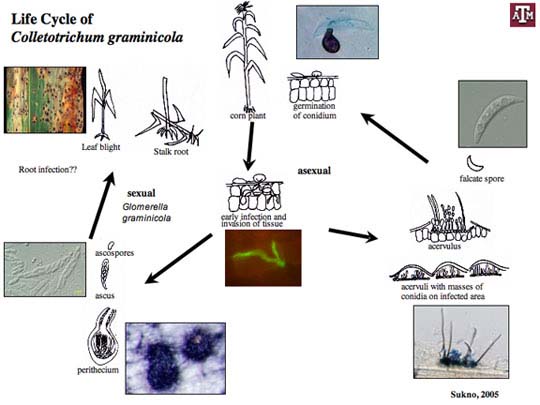 After infection, the fungus appears to grow biotrophically and spread to adjacent epidermal or mesophyll cells. This stage of infection is referred to as a biotrophic growth stage, since it does not cause death of host cells prior to infection, as is seen in later stages. By 48 to 72 hours, a switch to necrotrophic growth occurs, in which the fungus extensively colonizes the inter- and intra-cellular spaces of the tissue, causing death of host cells prior to colonization (Fig. 2 and Fig. 3).

This process of disease development, called hemibiotrophy, or facultative biotrophy, raises questions about the importance of lifestyle differences among fungi. Virtually nothing is known about the genetic mechanisms underlying the switch between growth phases although evidence from the literature suggests that there is only a fine line separating lifestyles of fungal growth.

Why are some fungi seemingly able to colonize plants with no obvious negligible effects to the plant while others are destructive pathogens? Why do pathogens such as C. graminicola switch between lifestyles during host colonization? What are the fungal and plant signals that mediate the transition? Our long term goals are to answer these questions.

Colletotrichum graminicola (Ces.) G. W. Wils. causes anthracnose stalk rot, top die-back and leaf blight of maize. The disease cycle is initiated by spores (conidia) that are disseminated by wind, splashing rain and irrigation water. Free moisture is essential for conidia to germinate and infect plants. The pathogen survives (overwinters) in seeds and residue on the soil surface, in buried residue, and as sclerotia (stromata) inside stems on the soil to infect newly emerged seedlings. Our lab has also shown that C. graminicola can infect corn roots and produce microsclerotia, which probably serve as overwintering structures. 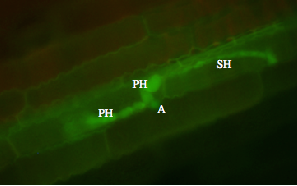 Spores germinate and large numbers and appressoria are produced that are essential for plant penetration. Appressoria breach the cuticle and the epidermal cell wall and establish biotrophic hyphae grow, that interact with the host cells but do not kill them. At a certain stage, the fungus forms necrotrophic hyphae that cause disease. Spores are produced in large numbers under the plant epidermis. Eventually, they erupt through the surface of the plant, forming a black fruiting bodies called acervuli. Acervuli are abundant in dead tissue and may also form in green, apparently healthy leaves. The black hairy or spiny fruiting bodies are easily visible with a 10X hand lens. Black hairs called setae are associated with acervuli and are diagnostic for Colletotrichum species.

Although the sexual stage (Glomerella cingulata) for C. graminicola has not been observed in the field, it can be produced in the laboratory. Dark pigmented perithecia are produced that contain hyaline ascospores (sexual spores). The ascospores are contained in sack-like structures called asci.

This entry was posted in Uncategorized. Bookmark the permalink.